Our parish is a warm, vibrant and growing Community of over 200 families. Our diverse parish includes those who were born into Orthodoxy as well as those who have converted to the Faith from various other traditions.

Today, as we look out on the front of our property, we see our dream fulfilled — a dream that has inspired our parish and stewards for many decades.  In April 2012, we officially opened the doors to our new Byzantine style church, completing efforts that began in the 1900’s.

Immigrants to the Norristown and Bridgeport area began arriving in the early 1900’s.  Many began small businesses in the food industry, starting small restaurants, grocery stores and candy stores.  Some worked at the steel mill in Bridgeport.  Over the years they kept together in a loosely knit community.  They met socially in their homes and had picnics, weather permitting.  They established a Greek school for their many children.  They churched by going into Philadelphia to attend services at St. George in center city, St. Demetrius on Larchwood Avenue, and Annunciation at 12th and Ellsworth.

By early 1970, liturgies were conducted on a monthly basis in the lower level of the Commonwealth Bank building on West Main Street in Norristown.  The Hellenic Civic Association purchased a multi-unit property on West Main Street which became the headquarters and worship center of the community. Over the next seven years, the concept of establishing a formal parish was born. 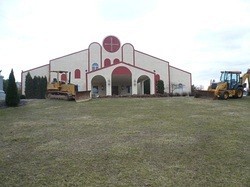 Becoming a Parish
In 1981 with approval of the Archdiocese and after the purchase of the one-time Pentecostal Church on Center Avenue (in West Norriton), the Hellenic Civic Association officially became the Greek Orthodox Parish of Saint Sophia, dedicated in honor of this Roman Saint of the second century including her three martyred daughters, SS. Faith, Hope and Agape. The Ladies Auxiliary then became the Philoptochos Society.

By the mid-80’s many priests served the parish, with the first full time pastor, Fr. Constantine Andrews, serving for four years (1980-1984).  He was followed by Fr. Spyridon Kehayes who remained until 1989. The Diocese of New Jersey (our home diocese) assigned Fr. John A. Limberakis to this parish in July of 1990.

With the arrival of Fr. John and a new energy, the parish began an extensive search for a more permanent site to build a church.  In July 1991, we were blessed to purchase our current 8 acre property  on South Trooper Rd., the Gateway to Valley Forge.   On October 10, 1993 we broke ground for the erection of our current Cultural Center.  Under the spiritual leadership of Fr. John Limberakis, the community completed the 16,000 sq. ft. multipurpose facility in the Fall of 1995. The building served as our house of worship until we moved into our new church proper in April 2012. 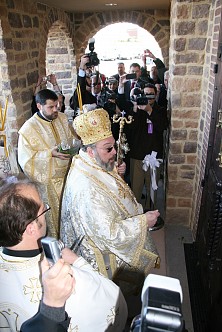 Fr. Peter Thornberg became our pastor in 2006, bringing youth and energy to our community.  Under his spiritual guidance, the community united to move forward with building of our new Byzantine style church and broke ground on March 6, 2011.  Construction began in June 2011. With an unseasonably warm Winter (or as we believe, Divine Intervention) construction was completed on time.  With His Eminence, Metropolitan Evangelos, we officially celebrated our Thyranoixia (Opening of the Doors) on April 7, 2012—just in time for our first Pascha (Easter).

For most of us, building and beautifying a church represents a once in a lifetime opportunity.  We were able to open the doors to our church - thanks to years of hard work and the generous support of our parish, community and many friends.

Even though the church proper is complete, there is still much work to do.  We need to raise over $1.6 million more to pay our debt, in addition to the funds required to continue the beautification of the church.  We welcome all to participate and gifts of any size are greatly appreciated.

We pay homage to those who came before us, and laid the foundation that brought us to this day in the life of our beloved parish. We look forward to the future, strong in our faith, and with hope and love in our hearts, to accomplish that which we must, for the generations that follow us. 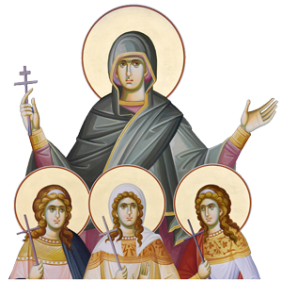